We’ve all heard the saying, “grief comes in waves.”  While I do believe that to be true, I certainly didn’t expect it to hit me at the most random times.
Say, in the middle of a CycleBar class.

That’s exactly what happened to me Saturday morning. 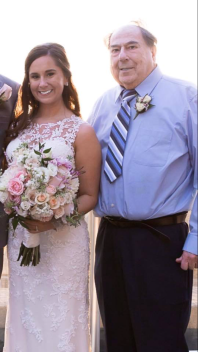 I woke up feeling great, ate a fulfilling breakfast, and headed out.  I pulled into the lot early, so I spent a few moments scrolling social media before I went into the studio.  I realized it was June 2nd, my Grandpa’s birthday…the same Grandpa who passed away just a few months ago.  Fighting back tears, I posted a “Happy Heavenly Birthday” to him on my Facebook timeline, paired with a cropped photo of us on my wedding day.

I pressed “Post” and headed into the studio to begin class.

There’s typically one song toward the latter half of the ride that the instructors call your “connect” song.  It’s a chance to connect with yourself, and really reflect on what brought you here today, and what you want to do to better yourself – both in class, and out.  They ask you, “Who/what are you riding for?”, “What goal are you seeking to achieve?”, and say all these inspirational things to get you to push yourself just a little bit harder.

Since it was fresh on my mind, I began thinking about my Grandpa.  I’d like to dedicate this ride to him, I thought.  (While I am technically riding for myself, I also like to think that I am riding for those who can’t physically ride with me.)  Being his first birthday in Heaven, I hoped that Gramps was spending his day with my angel baby.

And that’s when I lost it. I started sobbing, I mean, really ugly crying, in the middle of class like a lunatic.  A sad, grieving, lunatic.

What is my goal? My goal is to get myself healthy, inside and out, physically and mentally, so that I can carry another baby.  I found myself asking Gramps for strength to push through, to push one pedal in front of the other, to get through this damn class and this damn day.

The truth is, I have a horrible pregnancy-related memory attached to Cyclebar, so sometimes just being there is a struggle for me.  After a class in January, a week or two after I found out I was pregnant, I used the restroom after class let out and discovered I was bleeding.  Not a lot, but it was definitely there. I drove home in a total panic, but once I got home approximately 15 minutes later, the bleeding had stopped. My doctor said it was nothing to worry about, but perhaps I should hold off on taking any more classes until she saw me in the office.

Every class since then, there has been a little bit of paranoia, and self-blame.  Did my strenuous exercise cause me to miscarry? What happens if/when I get pregnant again? Probably being irrational, but these are still thoughts that cross my mind.

So I guess in closing, I should warn you:  Don’t take a Cyclebar class if you’re feeling a little unstable.  You might start ugly crying smack-dab in the middle of it.

Our greatest blessing. 💝
(almost) 27 weeks ➡️ 28 weeks ➡️ 29 weeks. How is it possible to love someone so much, whom you haven’t even met yet? 💗 Pregnancy after loss certainly isn’t easy, but every day we feel a little more excited and a little less scared. Keep growing, baby girl, and keep kicking mama like a maniac. #futureuswntsoccerstar #rainbowbaby #babygirlpeterson
Snuggle King 👑 #rudytootpeterson
2009 vs 2019. Just a few things have changed in ten years! . . . For one, I no longer bake in the tanning bed. Eek! 👻
The cutiest big cousin. 🥰💝 @caseygirly @goldbergphoto
Merry Christmas from the Petersons 💝🌈 #meetthepetes #babygirlpeterson #fourthbaby #babybump #pregnancyaftermiscarriage