Sorry it has taken a little while to get this recap post up!  Getting out of the vacation fog is SO REAL!  I feel like we are STILL trying to catch up.  The time change is always killer for me, and I had a kink in my neck for over a week from trying to snooze on the plane ride home.  Not to mention, our bodies have been totally resenting us after consuming way too much alcohol and unhealthy (though delicious!) food!

I decided to split this recap into two posts, instead of one incredibly long one, since it has taken me forever as it is. Here goes part 1!

We were up so stinking early and left our house by 4:30 AM to head to the airport. I was exhausted, yet so excited! After a 4-hour flight, we arrived in Las Vegas around 9:00 AM local time.  We weren’t able to check in to the hotel yet, so we dropped off our bags at the bell stand and headed off to explore! 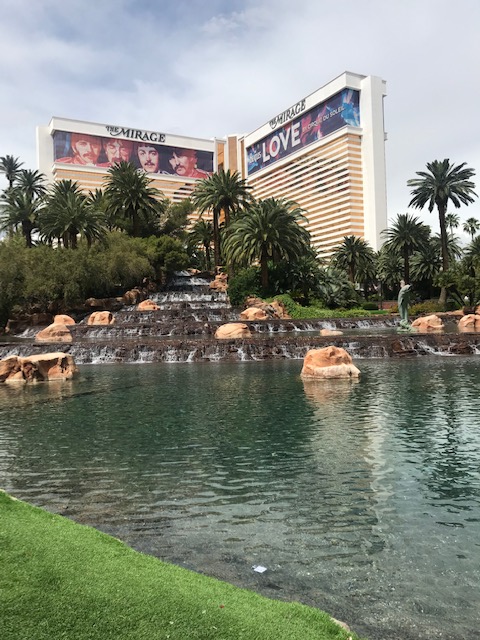 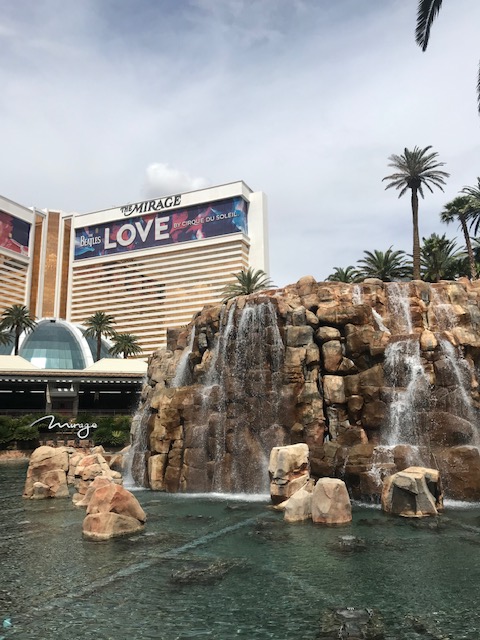 We ate lunch at the California Pizza Kitchen inside the Mirage (because really, is there anything better than pizza on vacation?!) and did some shopping at the Caesar Shops while we waited for our room to be ready.

I can’t believe I didn’t take any photos of the room itself. But, we did have a view of the pool out our window.   Behind the swimming pool are the dolphin pools (more to come on those!). 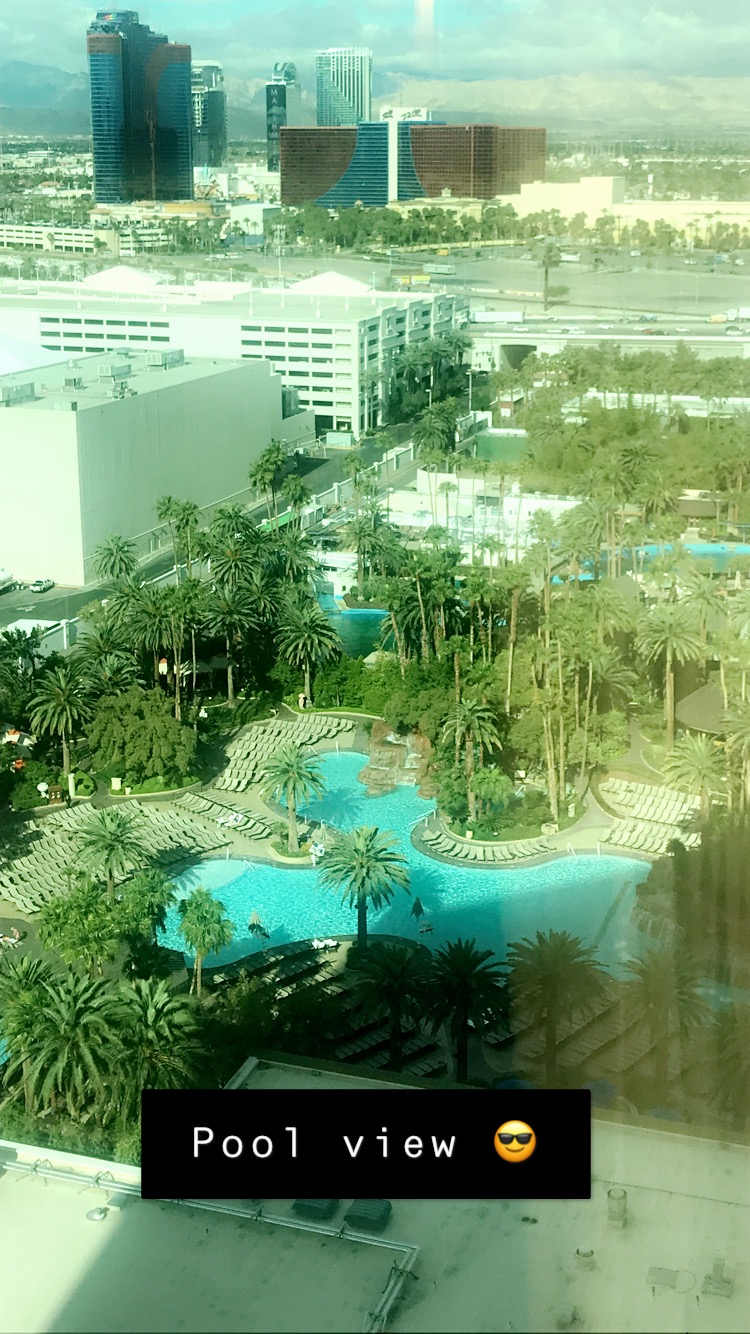 We got ready for dinner and I insisted on a selfie in the beautiful Mirage lobby on the way out!

The volcano structure in front of the Mirage that you see in these exterior photos has live “eruptions” every night with flames and music. Click here for the video! It was the coolest show! 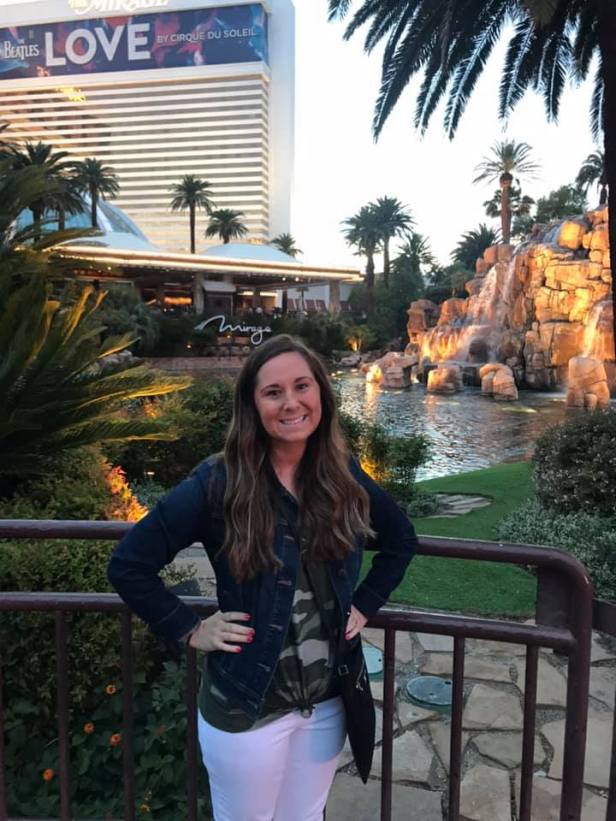 After we watched the volcano eruption, we went to a late dinner at Yard House. We did a little more shopping after dinner in the stores near Yard House, then headed back to The Mirage to gamble before heading to bed.

We started off Thursday with a bang, and walked down to Cabo Wabo for Breakfast.  I ordered a veggie omelet and Justin had a breakfast burrito. Both were incredible! We also opted for the Bottomless Mimosas & Bellinis (in all fairness, it was the same price as ordering only 2) which set us up for a wild afternoon! 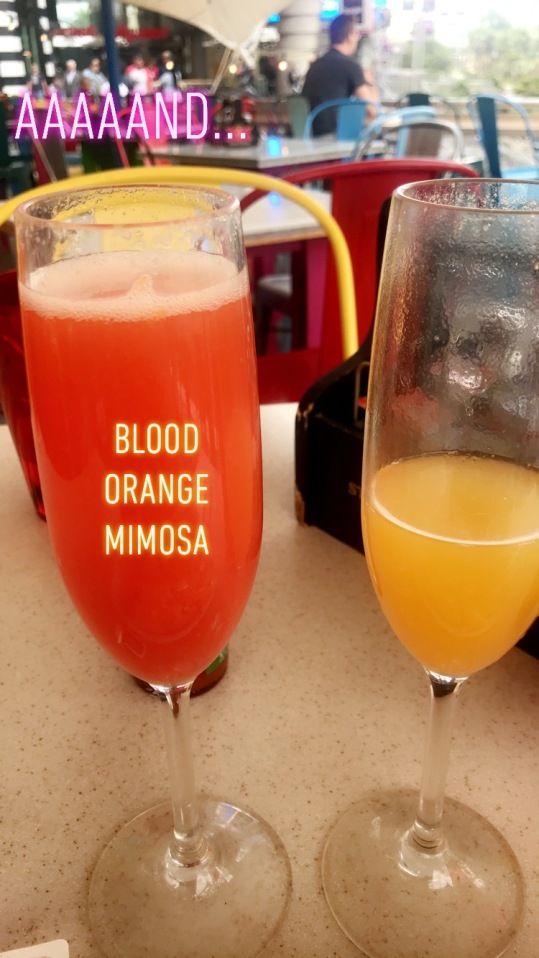 We sat outside, and had the most awesome view of the strip! The menu specifically says “No To-Go” drinks, so we didn’t ask for any.  However, when we got our final round, the server brought out FOUR flutes, filling up two to-go cups each! Needless to say, we highly recommend Cabo Wabo!

Both Wednesday and Thursday had unusual weather for Las Vegas. It was in the 60s-70s with off and on rain.  Since it was too chilly to hang at the pool, after breakfast we set off to explore the Cosmopolitan (the hotel where we stayed for our Honeymoon trip), the Bellagio, and Caesars. 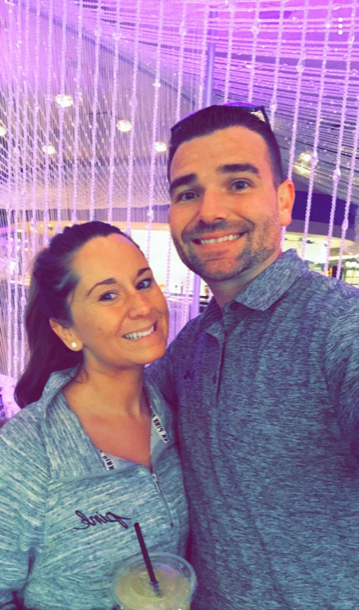 Obligatory photo in the beautiful Chandelier bar at the Cosmo. So gorgeous! 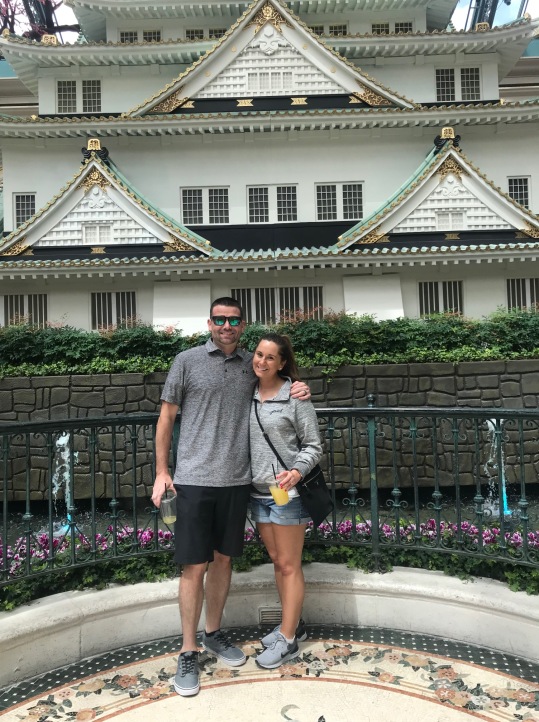 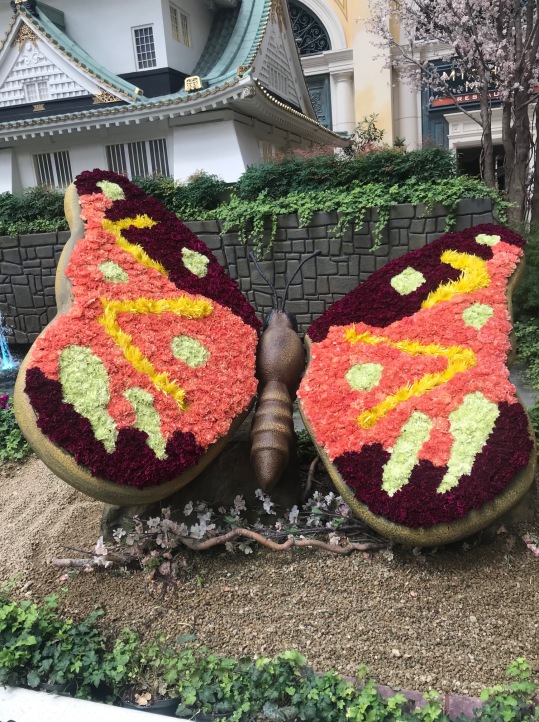 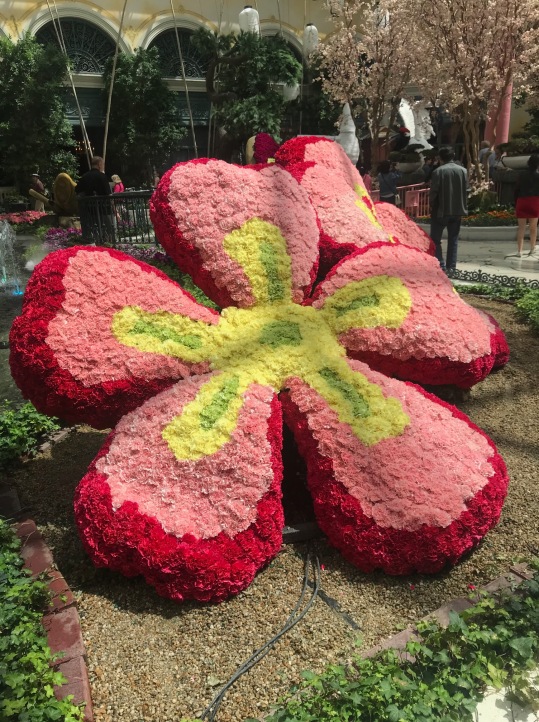 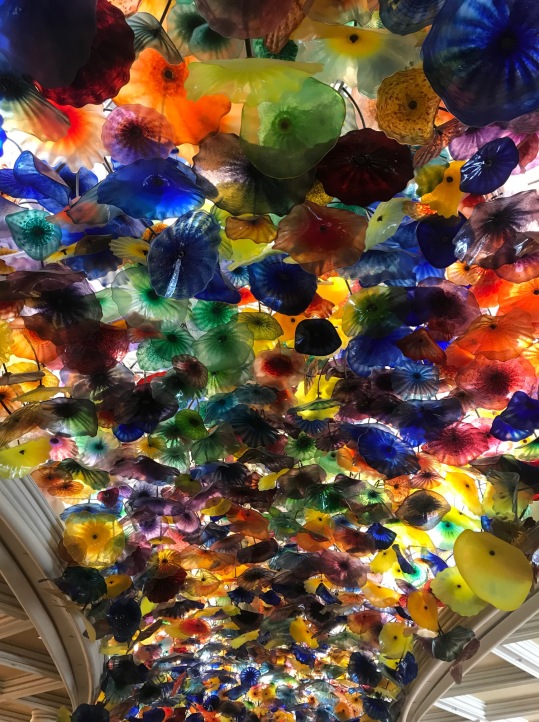 We checked out the Bellagio Conservatory & Botanical Gardens, and wandered around the Bellagio a while.  Justin was looking for a sweet golf polo or jacket with the hotel embroidered on it, but we didn’t have much luck. 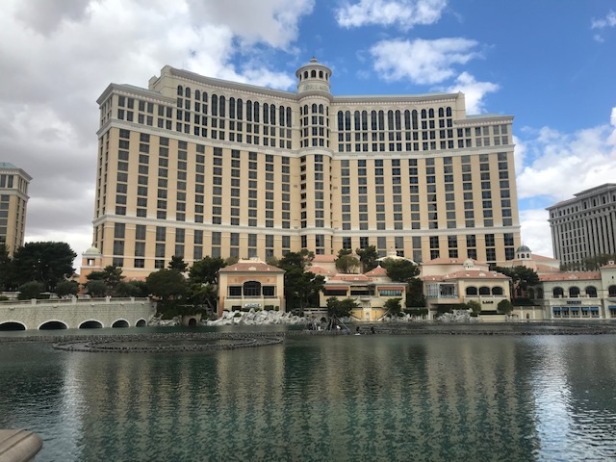 Did you see this Carpool Karaoke? It is hysterical, and we were so upset that we missed it in real life! Celine announced that this is her final year performing at The Colosseum at Caesar’s Palace.

Snapped a photo with Caesar himself.

After exploring the casinos a bit we walked down to the Fashion Show Mall and did some more shopping. This photo was snapped on our way there, in front of the Mirage. The statue is a tribute to Siegfried & Roy, and their white tiger, Mantacore, who used to perform a show at the Mirage. That is, until the tiger attacked Roy on stage. Seriously, look it up!

After our buzz-filled shopping, we went back to the hotel Justin gambled while I showered and got ready for the night. We met back up for drinks at the Rhumbar and a late dinner at Yard House. 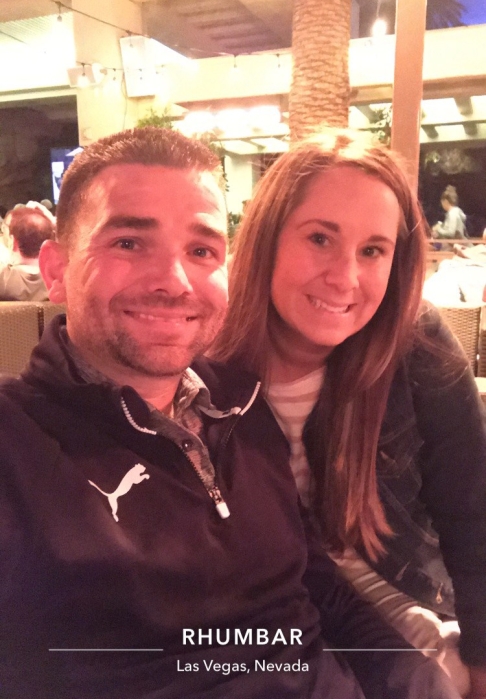 The Rhumbar quickly became one of our favorite hangout spots every night. Their mixed drinks were awesome and you could see the volcano show from the patio.

Now here’s where it gets really interesting…

As I mentioned, we were drinking all day so I was pretty wiped by 11 and decided to go to bed, while Justin jumped in the poker tournament at the Mirage. He came up to our room around 3:30 AM totally wasted.

He explained that the poker tournament was down to the final 4 participants, and they decided to split the money 4 ways. He had the most chips, and had a good chance of winning the whole thing, but agreed to split. He won $175.

IT HITS.  “PLEASE WAIT FOR HAND PAY” reads the machine.

A few minutes later, a guy comes up to him and asked him for his driver’s license and social security number. The man disappears for, what seemed to Justin was like 45 minutes. Meanwhile, a crew is taking apart the entire machine.  He wondered if they thought he cheated, or if they were trying to scare him. Also, did this man just run off with my identity? Are they checking cameras? What the hell is going on?

Finally, the man returns. He counts out $1800 cash into Justin’s hands, and hands him a paper he has to file with his taxes!

“So basically, I work here now,” Drunk Justin told me.

We laughed ourselves to sleep. He had won enough money in that one spin to pay for our whole trip so far!