After three losses, we have sooooo much anxiety and apprehension to even announce this. But…

Ironically, the day that I am writing this, is National Rainbow Baby Day (August 22).

How did we know we were ready to try again?

In short, after three devastating miscarriages, I wasn’t. But I also knew I’d likely never fully be “ready,” and it was best to just dive in head first and give it another shot. We had some great conversations in Las Vegas about trying again, Justin had a more positive attitude toward it so I followed his lead. Ultimately, we decided that when we returned home from the trip we would start tracking and planning again.  We feel very lucky that it happened quickly after that. I also don’t think it’s any coincidence that we conceived during the Women’s World Cup Finals week!

When did we find out?

We found out July 19th, when I was about 4 weeks pregnant. This might sound crazy to some, given our history, but we decided to wait a little longer before having our first ultrasound (I was 8 weeks 6 days on the day of our first scan). I really do think we have some degree of PTSD after hearing the ultrasound tech say “It looks like you’re 6 weeks!” so many times, and we wanted desperately to avoid that.  We knew that by waiting until almost 9 weeks, that if the baby didn’t measure as such with a healthy, steadfast heartbeat, we would immediately know there is a problem.

I was so anxious leading up to the appointment, that when the day came, my whole attitude shifted and I was instead, PETRIFIED. I was a complete nervous wreck. I couldn’t eat or drink anything all day, I was just paralyzed with fear…so afraid that my world might come crashing down for now a fourth time.

We arrived at the appointment, and the ultrasound tech calls us back. She’s new. Not the same tech I have seen with previous pregnancies, which was a relief. Not that the previous tech wasn’t a nice gal, but I just have horrible memories associated with her voice.  The new tech wants to do the ultrasound on my belly instead of transvaginally.  I shot Justin a terrified look like, “here we go again” because previously we have never been able to see anything with a belly ultrasound.  I couldn’t look – I stared at the ceiling with tears in my eyes, assuming she’s not going to see much. Then I heard her say, “There it is! Oh, and squirming around!” I looked and she was right. There was a baby, with a fast flickering little heartbeat. We both let out huge sighs of relief and started bawling!

After a minute or two, the ultrasound tech asked me to calm down so my belly would quit moving. Then, suddenly, we heard the sweetest sound our ears have ever heard – a heartbeat. “Measuring at about 190 beats per minute. That’s probably as high as yours is right now!,” she joked. Baby measured 8 weeks and 5 days, just one day off from my dates, which is perfectly normal.  Again, we let out huge sighs of relief and sobs.  We explained that we have never had a positive outcome during an ultrasound before, and I dubbed her my new best friend. 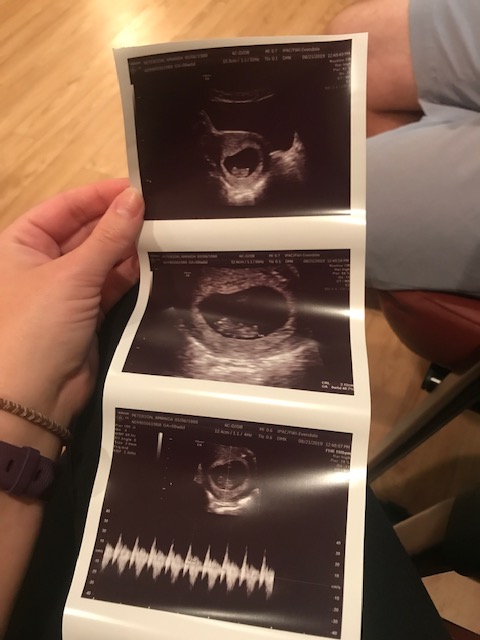 After the ultrasound they sent us back into the waiting room until my doctor was ready to see us. I snapped this quick photo while we waited, and sent it to my mom with the words, “WE HAVE A HEALTHY BABY!!!!!!” until I had time to fill her in.

Dr. Lemasters was excited to see us back in the office, and this time with news to celebrate! She reviewed and okay’ed my medications, and went over some basics.  I asked if she had any concerns since I have had three miscarriages with D&Cs. Long story short, my cervix has been through trauma three times, much like having three babies, so she’s going to keep a close eye on it to make sure it stays closed and firm. If it’s too short in length, or doesn’t stay closed on its own, we risk a second trimester loss. Which obviously, would be devastating.  She wants to see us back in three weeks (September 11th) to listen to the baby’s heartbeat on the Doppler, and check my cervix again, possibly by ultrasound.

At this moment, we are 9 weeks and everything looks great. We will be a day or two shy of 12 weeks when we go back, so we are wishing, hoping, and praying that all stays healthy! Grow, little baby, grow!

We love you SO much, already.  Thank you to your angel siblings for sending you to us at the perfect time.

I am undoubtedly aware that this post is going to be so, so tough for some of you to read and I want you to know that that’s OK. It’s OK to be mad, or jealous, or envious, or down right pissed off. I can whole heartedly understand that, because for two years that was me, too. I had such ugly jealousy for all of my pregnant friends who got pregnant by “accident” and had zero complications.  I’d grit my teeth through their baby showers and every baby-led conversation, only to break down in hysterics the second I stepped into my car.

What you’re feeling is valid. It feels unfair – because it is. The reality is, so many of us struggle with infertility, or have experienced miscarriage, stillbirth, birth defects, or SIDS, but others of us will never know or understand that pain. It’s important that we talk to others about what we’re going through and educate those who, luckily, never have to endure it first hand.

Please, please, know that — I see you, I feel you, and I understand. I’m here for you, and I’m praying for you, too, to be granted the miracle you deserve so much.